Snapshot is a Shudderspeed expansion that adds a new high risk method for diving into the near-death memories of ghosts---high-fiveing your GM.

Shudderspeed is a one page TTRPG that uses cameras as the core resolution mechanic.

Draw fast, snap shots, and yell 'Banishment!' before the ghosts get too close.

Re: GM compliance, do you mean the "take steps as the GM to make Skimming worthwhile" line?

The only time I try to require GM compliance is with safety tools and stuff.

For everything else, I try to include my own advice on how I think the game plays best, but ultimately it's up to the GM and group to play it in a way that works for them.

I was referring to needing to high five them. That's a joint effort activity, the GM could easily sway the results by lingering until the player slapped or by 'leaving them hhanging' to avoid providing info.

Something like "putting the camera down, slapping the table with both hands, then snatching the camera and taking the shot" would be totally in the player's control. The inclusion of GM participation suggested a possible control mechanism to limit how much / when information gets provided.

Which is cool, if that's the intent! I was just curious if the enhancement of GM arbitrage was a feature or a potential issue.

Oh, I wasn't even thinking the GM might mess with the high five, but that does open up some interesting possibilities.

It isn't really my intention that the GM refuse high fives---at least, not for the sake of stopping players from succeeding---but the GM proactively offering a high five or being reluctant to accept one could be used as a way to build tension and uncertainty. 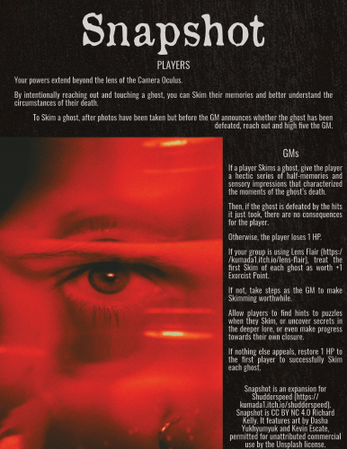