Using your Camera Oculus, banish ghosts from cursed places before they can kill again.

Shudderspeed is a one page TTRPG that uses cameras as the core resolution mechanic.

Draw fast, snap shots, and yell 'Banishment!' before the ghosts get too close.

And check out these cool third party expansions:

Definitely going to try playing this for spooky season! Do you think there's a maximum number of players this game can comfortably support?

Depending on which expansions you use and how much space you have, 1--6 players is probably the most comfortable group size.

That said, if you have a huge crew of players, it's probably still pretty balanced. 9 players *can* defeat a 9 hits ghost in a single volley, but that many players trying to take pictures at once is going to be a little chaotic, and might cause some of them to miss. Likewise, 9 players will pretty much always take down a 1 hit ghost in a single round, but with the way the rules are written some of them may still miss and take damage in the process.

If you want to put the pressure on a 9 player group, have them fight three 1 hit ghosts back to back, rather than one 3 hit ghost.

Essentially, the fewer players you have, the Fatal Frame-ier it is.

The more players you have, the Ghostbusters-ier it is.

I tend to prefer GMing for smaller group sizes, but if you trust all the players to keep track of their own HP totals and you have the scenario totally on rails, you could probably run it for a whole conference room.

In that case it'd probably feel like Time Crisis or Silent Scope.

Fantastic, thank you for the comprehensive answer!

This got me excited enough to put together my first itch project, thank you! :) I could feel all the Fatal Frame chills.

Whoah! I'll check it out right away!

This game has no business being this good, and I am so glad you put this together ((And am very excited to run this at some point))

I am not going to play this.

I AM going to make it the core ghost-exorcising mechanic in an episode of another game, and explain how it works about forty minutes before suddenly waving the statue around for a few seconds. This brings the idea of setting the tone for a horror game with props / atmosphere to a whole new level. Well done!

Heck yeah! I'm happy to have provided a fun minigame!

A spooky snapshot of a role-playing game. I really like the idea behind physically contesting with your GM in combat. 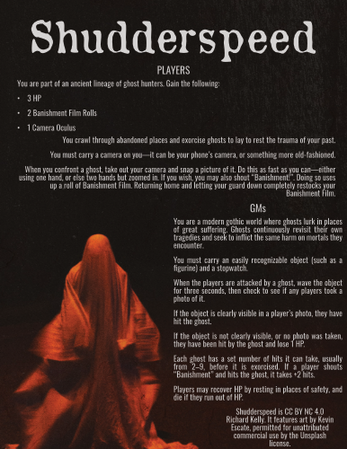