It started in the late year 200X. Ghosts, demons, and other occult forces grew resistant to conventional exorcisms. Minor possessions, the kind that would previously have been resolved with a sprinkle of holy water and a few minutes of half-hearted praying, suddenly became multiple-hour-long, life-or-death ordeals.

Worse, the unspoken rule that a possessing force had to operate only through the local environment became snapped and frayed.

Possessors could now manifest physically, and they were extremely swole.

Thus, the world entered a new age of banishments. Gone were the days when any reedy man could cast out a demon.

Fighting the supernatural was now a job for…

The Flexorcists is a 23 page tabletop rpg about pro-wrestlers working a side-gig where they banish ghosts, stake draculas, and powerbomb creatures from lagoons.

It's best for one-shots, but supports limited campaign play, and its primary mechanics use d10s and rock-paper-scissors.

What People Are Saying About The Flexorcists:

Man this is really cool! I love the way you've separated each situation into phases and the personalization of characters through stuff like entrance themes.

Thanks! It was a lot of fun to playtest.

The Flexorcists is a supernatural wrestling RPG. You play as wrestlers-exorcists, fighting and banishing supernatural monsters. I love how this game is structured in phases, allowing a gradual build up to the epic beatdown.

I know this is unlikely to be seen, but I wanted to know how FAITH affects KNUCKLE UNDER. It says in the stats section it resists it but that is ignored by the three round limit. I also wanted to know what the point of losing Faith dice after a Follow-up is if you just regain it at the end of your turn.

Ah, good catch! That bit under Faith is leftover wording from an earlier draft and it's kinda misrepresenting what Faith does.

Faith allows you to avoid tagging out during your turn in the Beatdown. Basically, every time you Follow Up you roll Faith, and on a success you lose -1 Faith and can take another action.

Sorry for the trouble. I'll get an updated version posted by end of day.

It's fixed! The game's download has been switched to the patched version.

Thank you for spotting that!

Thanks for the quick reply! I'm prepping to run this tomorrow for some buddies.

I really dig this game. It highlights the joyful aspect of wrestling from my childhood before you knew it might not be real, the idea that the vampire in the ring will really suck your blood unless they get pinned for three seconds. While this could easily just be a combat game of in-ring action, the procedures listed for setting up a gig, exploring the circumstances of the area and your opponent, and t hen diving into battle is a really nice structure for a more involved and satisfying story for all players. I think this would work really well too as an ongoing campaign with rotating players, having the core agency function as a mission hub and whatever brawlers are available to do missions, allowing for campaign-like progress without much commitment or buy-in.

Having modular rules for different tasks, whether it be the above-mentioned investigation leading to a fight, the way fights are paced and controlled mechanically, or variants like using a wrestler's entrance music to affect the story are all really fun inspired takes on the genre.

Def will be rallying to get this played (was going to say "to the table" but yknow, 2020). Excited to see what showboats and swamp things my friends come up with and how they settle things in the squared circle.

Whoah. Thank you for the review!

I'm glad you enjoyed it, and if you play it, I'd love to hear how it goes! 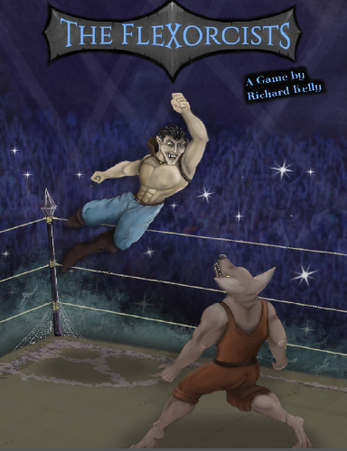 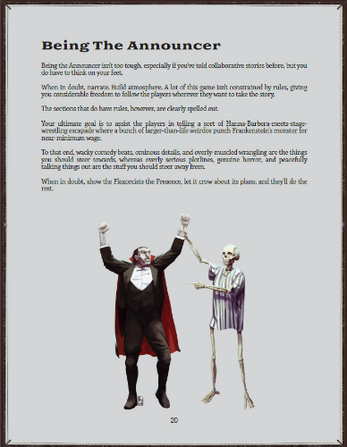 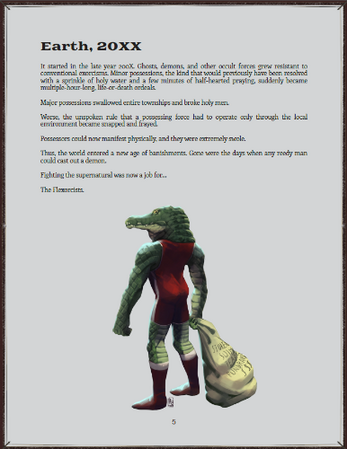 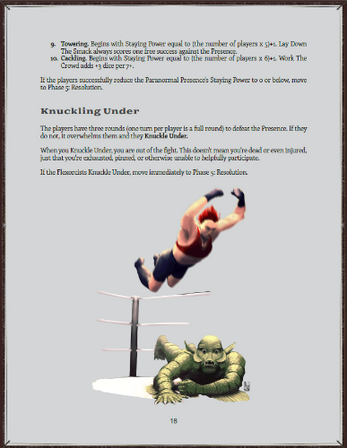