In the beginning, the bombs fell.

The ancients, who had built their civilization to a peak, shrugged and pushed themselves off of it. The world was scoured in radioactive fire, and the end of humanity came.

Except, the ancients weren't very good at their jobs. Even the part where they killed themselves and took the world with them failed to take.

Members of their own species---and members of others---endured the horrific winter that followed, as well as the creeping desertification, the wild changes to plant and animal life, and the long, slow process of waiting for radiation levels to disperse.

But that was all a thousand years ago, as best as anyone has reckoned. It is now the year 1007, and you are a person that lives in the wastes.

The wastes are unpleasant country---a mix of artifacts from the ancients and deserts left by their folly---but life clings to them like a boil. And where there is life, there is eventually friendship, meal-sharing, and community.

You live in one such community, and you are a part of their Grill Squad.

Post-Nuclear Pulp Wasteland Barbecue is a 38 page tabletop roleplaying game about solving problems, sourcing food, and cooking for your community.

Player characters are made from one of six Species, one of four Leans, and kitted with a custom loadout of Skills and Gear.

Every adventure involves scavenging for ingredients, and every game ends in a cook-off.

Also, the core dice system is a d0.

In order to download this game you must purchase it at or above the minimum price of $2 USD. You will get access to the following files:

sounds wholesome , but might use it for recipes (hopefully included) as who doesn't love post apocaluptic recipes

I'm not sure how good it is for real recipe generation (some of the example ingredients are things like "geode watermelon" and "psychospheric mushrooms") but it's definitely intended to be a mildly more heartwarming take on post-apocalypticism. 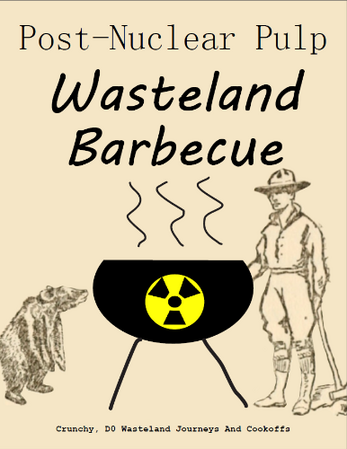 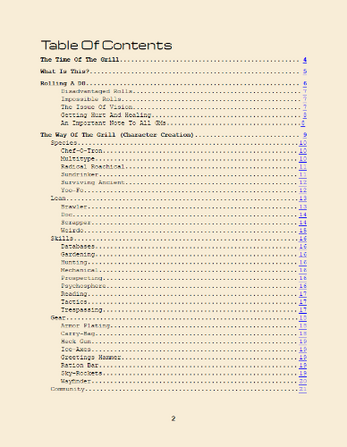 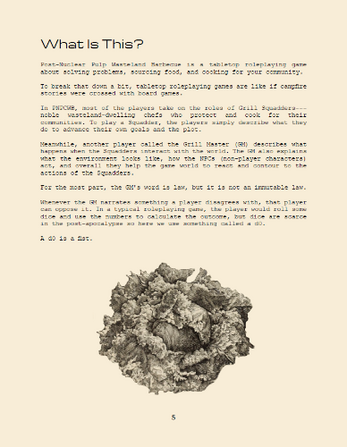 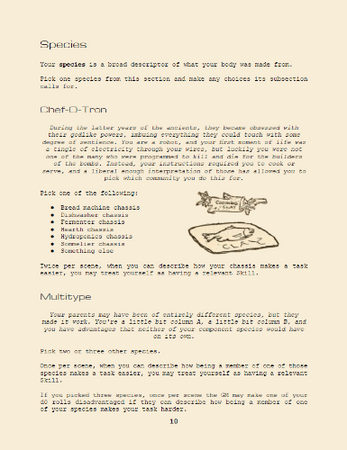