Three years ago, the Crocus War ended. Originally named because it originated in early spring, and because it was supposed to be beautiful and over by winter, it instead dragged on for five years as the Rakar Protectorate and the Lancate Pact ground each other into the mud.

The war began with single-shot rifles, cavalry swords, and summoning magics. It ended in trenches and rot and mass casualties.

Besah is a country that sits in between the two former opponents. Originally a member of the more coal-and-diesel focused Rakar Protectorate, it was nevertheless also influenced by the summonings and brasswork of the Lancate Pact.

Neither side won the Crocus War, but who lost and in what way is an ongoing matter of discussion for the politicians who are still negotiating the truce.

While tiny jots of territory are pushed back and forth between the two powers, Besah sits.

Quiet. Raucous. War-scarred. Healing. It waits on the borderline between all things, and it throngs with the displaced.

And it puts a heavy emphasis on the roleplaying part.

Dice aren't a thing here. The scope of the game is just your character and the things you say.

You play as two people: a server and a guest.

The server works at the tea house and will be "on screen" whenever there's another player that's playing a guest.

The guest will be on screen when everyone else is playing a server and you want to step into the spotlight.

In order to download this game you must purchase it at or above the minimum price of $3 USD. You will get access to the following files:

How many players does this game support (or recommended)? Game time?

I don't have great estimates for these, because the flow of the game is a little loose, but 2--7 people and 30 minutes--7 hours is the broadest ballpark I can give.

2--4 hours might be more common, but game speed really depends on how much people lean into the atmosphere and how much they work towards crisis.

If you're not sure if Iron Bough might be for you, please feel free to grab a community copy and flip through. 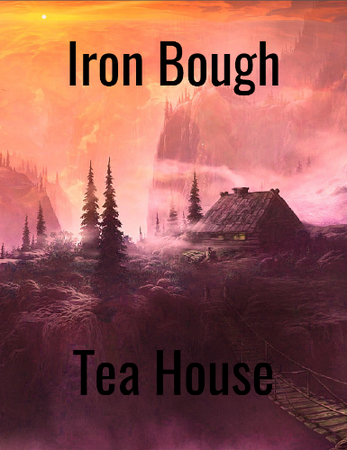 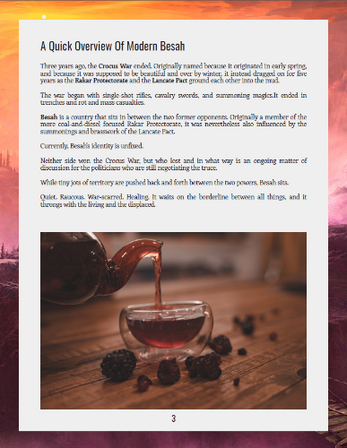 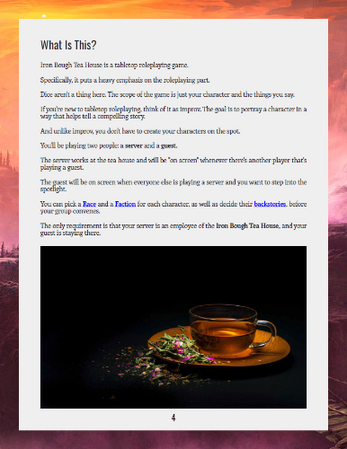 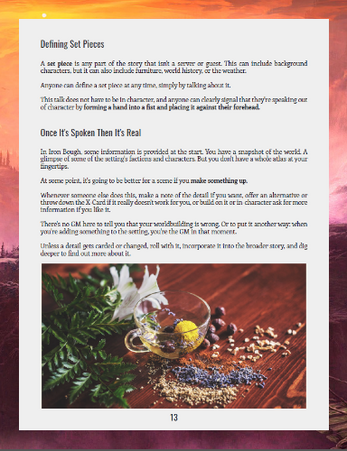