It has been twenty years since the mothmen arrived.

Issuing out of a scintillating rainbow nexus in Point Pleasant, West Virginia, they left their former home in the moth dimension and---with nowhere else to go---they settled in ours.

Mothmen are now as commonplace as any other person, and many have gone on to obtain high-paying jobs or influential positions in state and local government.

But for the very highest-flying of mothmen, there exists a special private school in the Netherlands. There, new mothmen are sent to study subjects ranging from business leadership and computer programming to Resisting The Lure Of The Lamp.

These mothguys are the best and brightest (or at least the wealthiest) of their generation.

And unfortunately for you, it is your job to pretend to be one of them.

Despite the overwhelming peacefulness of the mothmen, the United Nations still has some reservations about whether they can be trusted. And so they have sent in you, an outside observer their age, to move among them, gathering intelligence and ferreting out their deepest secrets.

This mission lasted all of a week before you were caught by the mothguys in the Beauty And Wellness club while pretending to fly with your imitation wings.

You'd thought it was all over, with scarcely enough time to pack your bags and return home in disgrace, but instead your club members told you that they'd keep your secret. After all, it was unfair for a school this good to be only open to mothmen. They could understand why a regular human would want to sneak in. They've got your back.

And so now you---a human---are trying to pass yourself off as a mothguy, juggling club activities and coursework, all while working to get close to your staunchest defenders so that you can report on them back to the UN.

And...you think you might be falling for one of them?

Fancy Holland Moth School Moth Club is a 9 page tabletop roleplaying game about trying to keep your cool while pretending to be a normal mothman at a school for mothmen.

You play by telling a story with friends, and occasionally rolling dice or assigning people tokens. If you're familiar with that really well-known game about the lizards and the basements, this is like that, but instead of either of those things you're maintaining your cover while trying not to fall in love with mothguys.

No, this fever dream is the result of someone asking why a specific romance manga hadn't been turned into a trpg yet.

Ultimately I ended up with something that was absolutely nothing like the material I was adapting. 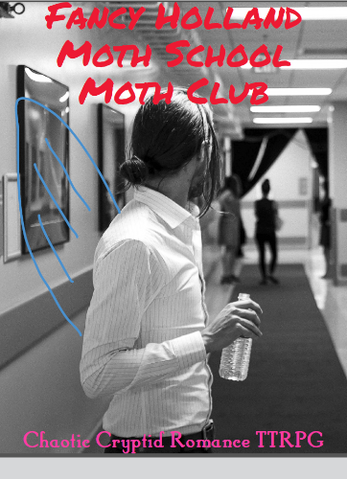 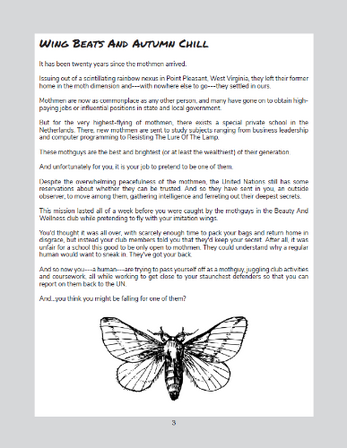 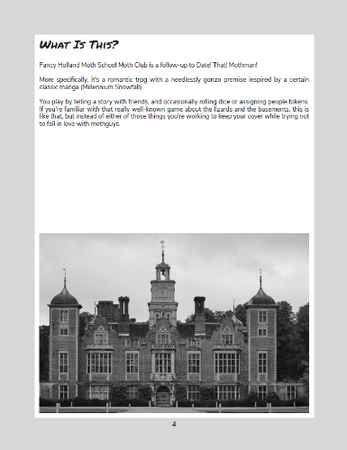 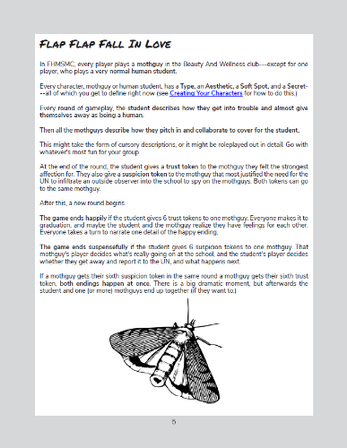